He is played by seasoned actor Ricky Davao 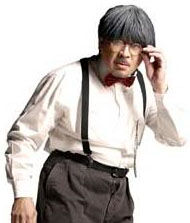 Dr. Danilo Morgan (1955-2010) is a Filipino scientist. Dr. Morgan is strict to his son, Eduardo, whom he'd adopted from Hospicio De San Martin. In 2009, Dr. Morgan recovered several large icebergs with creatures inside. The creatures were the Leech Woman, the Wood Witch, the Demon Woman and the Hawk Woman. He quickly heated the icebergs and the four creatures escape and wreaked havoc in the city, until Darna managed to defeat them, albeit temporarily.

After Roma and Impy's death, a giant frog appeared and attacked San Martin. It was revealed that during Roma and Impy's time, he and Apollo had formulated a compound that enlarges any creature and they tested it on a frog. Darna came to stop the giant frog by impaling it with a pole.

He later had a plan by capturing Darna by using Shiro of the Bazooka Gang. He tries to have a ransom in exchange for Darna's release. He plans to mutate his own adopted son. Unknown to others, he had made some modifications to his son, Eduardo's genetic structure, (which is the same thing Armida (the Hawk Woman) has). He is revealed to be a grandson of Dr. Montgomery, the creator of the Hawk Woman. He later modifies the Hawk Woman's wings. When the Hawk Woman got killed by Darna, Dr. Morgan now supports Father Mateo's plan to get rid of Darna. Dr. Morgan also supports his son, Eduardo's plan to find and kill Valentina. In 2010, Dr. Morgan was the victim of attack by Impy and dies.

His appearance is more like a nerd. Dressed in a long sleeved buttoned-down shirt, bow tie, a pair of suspenders, formal pants and black shoes, he appears like a weird scientist.