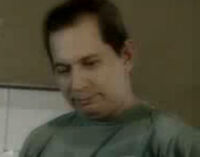 Dr. Montgomery was Dr. Danilo Morgan's grandfather, and in effect Eduardo Morgan's (adoptive) great grandfather. Back in the 1940's he was the one who 'created' the Hawk Woman. He discovered a gossamer element called Element X which can be injected into the bones to make them hard as steel. Dr. Montgomery represents a family legacy and heritage of genetic research.

His last creation, Armida, killed him as one of her first acts of revenge.

A triangle of dots is Montgomery's symbol, which he tattoos on his 'creations' usually in the bone part of the palm. The symbol survives him and is also used by Dr. Morgan in the present time.