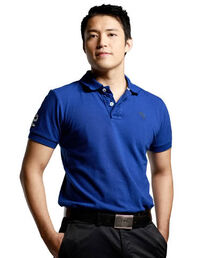 Eduardo Morgan is Narda's love interest. Unknown to many he is also Black Rider, who arrives at the end of Book One.

When Eduardo was younger, he meet Narda at Anton's prison after he and Narda were kidnapped. He became friends with Narda and they promised that they never left each other. Then, Narda and Eduardo were saved by Officer Alfonso. Both of them were tooken to Hospicio De San Martin where they were tooken care by Ms. Perfecta. Then Eduardo was choosen to be adapted by a scientist named Dr. Morgan. He was sad that he had to left Narda. Years later, he visits Narda at the orphanage. But then, Eduardo was bitten by a snake and was controlled by Valentina. He was forced to love Valentina. Then, Eduardo was un-controlled, thanks to Babaeng Linta. Then, Eduardo took care of Narda when she injured her leg.

time with Valentina by shopping. Then, Eduardo finds out that Narda is in the hospital. He went there and he tried to beg her to love him but Narda said no. Then, Eduardo was about to get killed by a controlled Darna but Valentina save his life and Valentina ended up being injured. Eduardo has to choose which women to love: Narda or Valentina?

Then, one day, Eduardo was driving in the freeway. Then, a group of terrorists leaded by Shiro attacked the freeway and invaded Eduardo's car. They pushed Eduardo out of his car and Eduardo was about to get killed by a spinning truck. Then, Darna saved him and they both fly up. Darna and Eduardo looked at each other. After all of this, Eduardo told Watson and Valentina about Darna saving him. Eduardo said that he has a crush on Darna. This makes Valentina really jealous. Unknown to his close friends, he had a somewhat microchip on his palm, the same thing that Armida or Babaeng Lawin had. He is later revealed to have also been infused with Element X, and as such is gifted with greater-than-human physical strength.

Eventually, Eduardo does manage to have Narda in a relationship with him, even going as far as asking her to marry him. However, on the day of the wedding, Lucifera, The Wood Witch and Armida, the Hawk Woman kidnap Eduardo and have a battle with Darna, whom they've recently discovered to be Narda. After the battle, Narda breaks it off with Eduardo, worrying for his safety. After which Eduardo seemingly leaves town.

Eduardo then gets waylaid by Valentina and taken to her lair. Valentina then plots to alter Eduardo and turn him into a snake hybrid. However, Serfina takes pity on him and lets him go.

Upon his return to San Martin, he uses his super strength to take on villains as the hero, Black Rider, eventually encountering Darna. The two acknowledge each other as comrades in the battle against evil, with their alter-egos Narda and Eduardo left none the wiser about their true identities. While some people suspect the new chief-of-police, Pancho to be the Black Rider, Eduardo's assistant Watson discovers the truth when a gang forcibly enters their mansion and, in the heat of battle, the Black Rider's helmet is tossed off.

After Serpina's attack on Hospicio De San Martin, Serpina Kidnapped Consuelo, Where Darna And Black Rider went After Her, Black Rider told Darna to take Consuelo back To The Hospicio, When Eduardo Confronts Serpina (Who reverted back to her Human Form) Serpina Lost Her Temper and killed Eduardo,by biting him several times in the chest, Darna arrives too late, where Darna Admits that she Is Narda, After telling Narda one Last Time That He loves her, he dies in Narda's arms,The Keeper of the stone (The Original Darna)Appears Before Narda, Narda asks The Keeper to Revive Eduardo as payment for all the things she had done for San Martin, But The Keeper Tells Narda it's to late to revive Eduardo. Narda is Distraught by his death, as well as his Father, Dr. Morgan. Dr. Morgan Tries to revive Eduardo, But His Assisstant,Apollo, Tells him that they have Failed to revive him, Leaving Dr. Morgan more Distraught about his son's Death.

Difference from the comic books[]

Community content is available under CC-BY-SA unless otherwise noted.