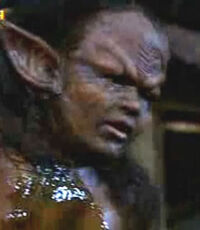 Impy is played by Mura

Impakto or Impy (1941-2010) is the seemingly androgenous demon half of what is known as the Babaeng Impakta (roughly translated 'Demon Woman') was one of Darna's original enemies from the 1940's. She was the evil twin of what was once a moneyed girl Roma with the defect people oft thought of as a hump on her back. What was unknown to everyone was that she actually had a this demonic twin conjoined to her- a demon that wished evil upon the world and tried many times to get her to give in to murderous urges. Roma was at first, able to sate her demonic twin's temptation. She falls in love with a young man, but she later discovers that the young man was merely using her for her money. Then and there, she gives in to Impy and murders the man and his secret lover.

Eventually the original Darna defeats her along with three other villains. However a storm reveals the four encased in hail-blocks. Upon their discovery, Dr. Morgan quickly acquires them. Because of his tweaking the casings, the four manage to escape and wreak havoc around the town of San Martin. The villainesses demand to see Darna but instead are faced by the Keeper of the Stone (the original Darna) who promises to give them the stone, if they leave the town alone. The Keeper keeps her promise but only gives little of the power to the four villainesses before a darkness consumes them.

However, the darkness releases the twin demons in the form of the Demon Woman and she once again begins to wreak havoc on her own, taking hearts from men and leaving the corpses at the foot of the original Darna's memorial. Roma appears to project her hatred of her ex-lover and his secret lover onto every single one of her victims.

When Darna finds Roma attacking the town once again, she fights her off and manages to separate the twins. Due to the shock of the forced separation, both the Impy and Roma die. Impy was Serfina's uncle.

Impy comes back to life when Roma does, albeit in a separate fashion. It finds itself longing for a host to feed hatred to and attaches itself to Eduardo. When Eduardo attacks Narda and snaps out of its spell, it finds itself without a host once again. It wanders around the orphanage until it finds a new host in Ms. Perfecta, calling herself Impakta Perfecta, thinking she's found a truly evil host. Impakta Perfecta gathers all the childern in the orpanage and prepares to murder them. However, Darna once again manages to sway Perfecta, reminding her of her inner good, and Impy is forced to leave, with no casualties whatsoever. The following morning, Impy finds a young boy, Ding, being insulted by others because of his social status. Impy then realizes that this young mind may be easiest to sway than others. It attaches itself to Ding and kills the two women who earlier ridiculed him. Ding feels a connection with Impy, and Darna realizes this so she forces Impy off of Ding at a high altitude, rescuing the child. Days later, Impy came to Roma. Roma sprayed church water on Impy so that Impy can die. Impy pretended that he is dying. Then, Gabriel appeared angry at Roma. Then, Impy was about to kill Gabriel but Roma said no. Then, Roma finds out the truth ans Impy controlled Roma again! She became the Demon Woman. The next day, the Demon Woman went to Narda where she attacked her. Narda escapes from the Demon Woman and Narda turns to Darna. Then, the Demon Woman appears and Impy went to Darna and the Superhero Darna was controlled by Impy!!! At first,Darna resisted.But,when she fell from the sky,Impy told her she was used.Darna belived her,and she attacks Eduardo,but when Valentina tries to stop her,Darna(hypnotized by Impakta) attacks and almost killed her.Then, Tagapangalaga ng Bato came and told Darna that she did the wrong thing. Darna listened to her and she took off Impy on her back. Then, Darna injured Impy with a hard stick.Impy dies but he was found by Dr. Morgan. Then, Dr. Morgan took him to his laboratory where Impy wakes up. Impy made an agreement with Dr. Morgan to do whatever Impy says. Then, Impy, Roma and daughter escape from Dr. Morgan's laboratory

The day of Impy's death[]

After that, Impy kills the policeman that were trying to kill Roma. Then, Roma decided that she wants to be evil again. So she finds Impy and Impy goes to her back. Both of them caused chaos in the city later. Then, Impy was driving an ambulance. Then, Darna stopped him and Darna trowed him to the bushes. Then, Roma tells Darna that Roma should kill herself so Impy will die so the city will be saved. Roma went to the top of Father Mateo's church. Then, Roma quietly killed herself by dropping to the ground from the top of the church. Impy then dies before he killed 2 people with fire. Impy ended his life. His body was taken into Dr. Morgan's laboratory.

Dr. Morgan has acquired Impy's body and has planned for revival. He has a blood sample taken from Valentina who got shot by Eduardo. He and Apollo put some blood on Impy's body and then afterwards, Impy revives from her death despite her sister's demise. After Apollo tries to prove his worth to Dr. Morgan (this is probonily why he says his useless) he brings Impy back to life and Impy escapes the lab knocking Apollo out ( who is in big trouble later). Impy goes to Roma's grave to reunite with her sister but unforuntaly Roma's body was only a skeleton now and couldn't fuse with her again. However she soon discovers Roma's daughter Anne/ Serphina and nearly has her for a quick snack until she sees Serphina transform into a snake and quickly rememebers that is her sisters baby. Impy soon makes a partnership with Serphina and tries to unit with her but fails wondering why she couldn't fuse with people anymore and realizes that Roma was the connection for that abilility. Impy ask Serphina if they can eat and Serphina offeres her a rat but Impy finds it replusive to eat such a rodent (sure and yet you eat cats and dogs oh and the hearts of people).Serphina takes Impy back to the orphanage with her and tells her Aunty to hid and she will find her food. Impy gets impatent and looks for food and nearly gets discovered a few times if it weren't for Serphina coming to her aid( haha kinda like Ding and Darna). Serphina soon offers Edwardo's heart to Impy if she helps Kobra kill Edwardo but Impy refuses not wanting to get involve. Soon after Kobra is defeated Impy had to help remove his heart and put it in Valentina who was fatally wounded from Edwardo stabbing her in the heart. At this point Impy just stayed around the area of Kobra's cave to help guard Valentina with Serphina. Impy ran into Flora Carnivora one of The Wood Witch's minions and beats him up for getting in the way of her prey( which was very funny). Afterwards Impy help save Valentina from being stabbed(again) from Xandro who didn't want her to live due to Kobra's proficy. Impy and Serphina soon decide to hide Valentina near the orphange where no one would suspect of looking for her. Impy than guards her their but sadly wasn't around when Valentina finally revieved. Serphina than askes Impy to help save Narda from Armida but Impy just scuffs it off and says "I'm and Impkata my dear and playing superhero just isn't my thing haha". They both return to the cave and soon discover Valentina revieved.Impy became a supportive Aunt to her niece during her resurrection making her less evil.

The Devil and the Angel[]

The Demon Woman is actually comprised of two beings - the girl (Roma) and her demonic twin (Impy). The twin itself has no power except to sway the girl to evil deeds. The girl then controls the twin's extra arms that lengthen, with sharp claws. . Her eyes turn white when she's consumed with evil.

For a short time, when she absorbed the part of the energy of the stone. She managed to gain Darna's psionic power of levitation/flight.

Impy, separated from Roma, can act as a symbiotic and attach itself to other beings.

Impy has elastic arms which she use as a weapon. 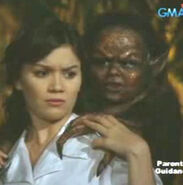 Impy without a host 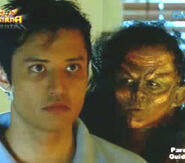 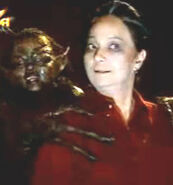 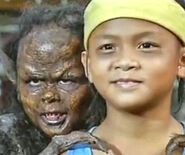