Kobra is played by Paolo Contis. 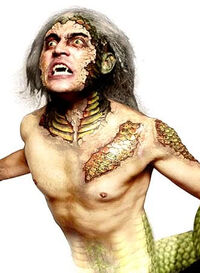 Kobra (1930-2009) is a humanoid/snake hybrid who dreams to have the snakes rule the world. He's the most prominent villain in the series. He is the real father of Valentina. In 1985, Kobra raped a woman named Consuelo that made Consuelo conceive a daughter (Valentina) with the genes of a snake. He is also the one who was thought to have killed Narda's mother, Alicia. When Valentina came to his cave he revealed his true heritage. Valentina did not believe him. In 2009, Kobra gave his daughter a snake to control Eduardo. She manages to almost get him to marry her but the effect wears off when four villains attack the town and Valentina supposedly dies, falling from a cliff.

Shortly thereafter, Kobra stores Valentina's body in his lair as she sheds and grows a new body (with a seemingly bald head). This requires Valentina to be in a coma for a few weeks. When, Valentina wakes up Kobra reveals his plans for her, which is to be Queen of the Snakes alonside his son (later revealed to be Xandro). He stores her in a small cavern with seemingly no escape doors. But Valentina escapes angering her father. The week after, Kobra sees Roma outside his cave. He puts Roma in a room with a lot of snakes and seemingly rapes her as well, making her pregnant. Roma then escapes from Kobra. Kobra's new child with Roma is a metamorph named Serfina (also known as Anna), able to become a snake. At one point, Kobra sees people outside of his cave. They were Loleng and Narda, both led to believe that Loleng's daughter Consuelo is in the cave. Kobra grabbed Loleng with his snake tail but decided that Narda was a better catch. Then, Kobra grabbed Narda but Kobra finds out that the police were after his child. Kobra kills the police officers in pursuit and gets back his child. It is revealed that Kobra is keeping the body of Consuelo and he has plans to revive her.

After Valentina's apparent "death" at the hands of Eduardo, Kobra emerged from his adobe to confront the mortal, resulting in a clash against Darna who managed to subdue the man-snake thanks to her newly retrieved ability of invincibility. However, Kobra manage to get the best of the superheroine by spitting sticky saliva on Darna's face, blinding her temporarily and allowing Kobra to escape, but only for a time. He asks Impy to take his heart as he dies and to implant it in Valentina's body to save her. With this he finally truly dies.

Differences from the Comics[]