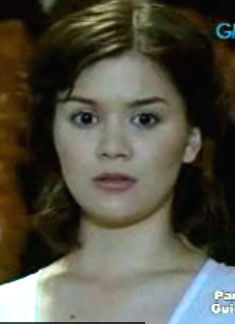 Roma is played by Nadine Samonte

Roma (1986-2010) is the human half of what is known as the Babaeng Impakta (roughly translated 'Demon Woman') was one of Darna's original enemies from the 1940's. She was once a moneyed girl with the defect people oft thought of as a hump on her back. What was unknown to everyone was that she actually had a demonic twin conjoined to her- a twin that wished evil upon the world and tried many times to get her to give in to murderous urges. She was at first, able to sate her demonic twin's temptation. She falls in love with a young man, but she later discovers that the young man was merely using her for her money. Then and there, she gives in to her twin and murders the man and his secret lover.

Eventually the original Darna defeats her along with three other villains. However a storm reveals the four encased in hail-blocks. Upon their discovery, Dr. Danilo Morgan quickly acquires them. Because of his tweaking the casings, the four manage to escape and wreak havoc around the town of San Martin. The villainous demand to see Darna but instead are faced by the Keeper of the Stone (the original Darna) who promises to give them the stone, if they leave the town alone. The Keeper keeps her promise but only gives little of the power to the four villainous before a darkness consumes them.

However, the darkness releases the twin demons in the form of the Demon Woman and she once again begins to wreak havoc on her own, taking hearts from men and leaving the corpses at the foot of the original Darna's memorial. She appears to project her hatred of her ex-lover and his secret lover onto every single one of her victims.

When Darna finds Roma attacking the town once again, she fights her off and manages to separate the twins. Due to the shock of the forced separation, both the twin and Roma apparently die.

Roma snaps back to consciousness fully separate from Impy. Confused and alone, she is taken in by Gabriel, who grew up around the parish. He asks the town parishioner to take care of her. During her time in the parish, she ponders questions about forgiveness and redemption. Then, one time Roma was running away from the church to hide from Impy who was hunting for her. Gabriel followed her and suddenly Impy attacked Gabriel. Roma begged Impy not to kill Garbriel and Impy went away. Then, Roma sends Gabriel to the Hospital. Then, Roma meets a new friend named Narda. Roma told Narda about Impy and how she got Impy. Long ago, everytime Roma and her parents went to the church, they felt something strange. Roma's parents took her to a expert where Impy appeared on Roma's back. Then, Roma's parents did not allowed Roma outside because of Impy. Then, Roma and Impy killed several children and that how she ended up being a demonic being. After Roma's story, her and Narda were officially friends. The next day, Roma went to Narda to talk about Impy. Valentina hears there conversation. Then, Valentina told Gabriel the truth but Valentina pretended she was Narda. This would likely ruined the Friendships of Roma, Gabriel and Narda.

Back as The Demon Woman[]

After she was released from Impy, Roma tried to beg forgiveness from Gabriel. Gabriel said no and he gets really mad at Roma. Then, Roma dies because Impy was killed by Darna. The two of them are bound together be each other's life force. But, Kobra found Roma and took her to his cave. She escaped from Kobra and she went to Father Mateo. Roma finds out that people know that she is the Demon Woman. Then, Father Mateo and Roma tried to escape from the villagers who are planning to kill Roma. But, Roma was captured by the villagers and she was hanged up in a stick. Then, the villagers put fire near her. Then, one of the villagers burned Roma's face! Then, Roma was captured by famous scientist Dr. Morgan. She was taken to his laboratory where Dr. Morgan discovered that Roma is pregnant! Then, Roma wakes up and she realizes that Impy is still alive and her face is burned. Roma screams and Dr. Morgan sees her. Dr. Morgan injected her. Then, Roma wakes up again and says she is really hungry. She ate food but after she ate food, she trowed up. Then, Dr. Morgan said to Roma that she is pregnant and the baby is a snake. Roma was shocked. Hours later, Roma's baby was born and it was a girl. Then, roma finds out that her baby can turn into a snake anytime. Then, Roma heard that Dr. Morgan is going to use Roma, Impy and the baby for his scientific experiments. Then, Roma, Impy and the baby escaped from Dr. Morgan's laboratory. Then, the police were after her. The baby saved Roma's life from getting shot by the police.

The day of Roma's death[]

After that, Impy kills the policeman that were trying to kill Roma. Then, Roma took her baby to Father Mateo's Church. Roma gave Father Mateo her baby. Then, Roma decided that she wants to be evil again. So she finds Impy and Impy goes to her back. Both of them caused chaos in the city later. Then, Roma almost killed a woman but Darna tells her that killing people is not a good thing. Roma tells Darns that Roma should kill herself so Impy will die so the city will be saved. Roma went to the top of Father Mateo's church. Then, Roma quietly killed herself by dropping to the ground from the top of the church. Roma said her last words to Darna. Just like Impy her body was taken to Dr. Morgan's laboratory.

When Dr. Morgan and his scientist partner Apollo escapes from the hospital due to Apollo's ability to change his hands into snakes(from the blood of Valentina)Dr. Morgan was very impressed he is also worrying because he thinks that Valentina,Serpina and Zandro might take revenge to him also he plans to release his secret weapon Apollo saw that Roma's Corpse is in a secret chamber Dr, Morgan request to dig Roma's resting place at the cemetery before her body dreads the chamber accually stays her young and heal her burned wound in her face the experiment performed is injecting a family serum and the mixed blood of Babaeng Linta and Babaeng Lawin Dr. Morgan observed that it didn't work Dr. Morgan thinks that Roma is incomplete so he finds Impy. Impy was back at the lab Impy saw Roma's corpse Impy explains that when she digs the grave she saw her twin body is already bones accually after taking the body of Roma Dr. Morgan but another bones at her grave. Dr. Morgan confest to Impy that he fooled her but Dr .Morgan says that the more important is that she will come back to her sister Roma. Impy rides at Roma rejoicing the engery of the twins Roma was revived they escapes again in the lab. While walking at the road Roma gets a cloth and covers Impy they seperate first to each other then Roma goes to Gabriel Impy follows Roma Gabriel runs and Roma follows Garbiel but she lost him.Roma confronts Impy then Roma's back accually sounds cracking then Roma feels pain Impy also feel the pain but in her chest Impy fell in Roma's back then a cybernetic metal wings grew on Roma's back she ask Impy if she knows something from this but Impy replayed no she ask Dr. Morgan she finds out that her wings came from as serum and blood she reason that she will not use it for evil and she escapes the lab.

When Roma arrives at the church to visit Gabriel, Serpina arrives.

The Demon Woman is actually comprised of two beings - the girl (Roma) and her demonic twin (Impy). The Roma herself has no power except to provide the natural host for her twin Impy, since it is only by having Roma as a host can both of them reach their full power. In fact, the best way to overpower both in battle would be to seperate the two from one another, weakening the two beings considerably. Roma herself becomes exceptionally strong for as long as Impy adheres on her back, to the point where she can knock down a being like Darna to the ground repeatedly; without Impy, she is just about as frail and weak as any normal girl can be . As for Impy, it is capable of swaying the girl to evil deeds, mainly by exploiting the inner darkness that dwells within people. The twin's extra arms that can also lengthen, with sharp claws. Her eyes turn white when she's consumed with evil. According to Kobra, Roma is quite "unique" for a human. It is for this reason why the girl became an unwilling bride for the man-serpent

For a short time, when she absorbed the part of the energy of the stone. She managed to gain Darna's psionic power of levitation/flight.

Roma was revived by Dr. Morgan by using a mixed blood of Armida(Babaeng Lawin) and Lutgarda(Babaeng Linta). His grandfather's old element which is element X, even her twin demon sister Impy she accually inherit something from the blood. The new Roma revived now had metallic claws is apedt in fighting hand to hand combat, which she uses to fight Serpentina and beats her with.Roma inherits Babaeng Lawin's are the ability to grow cybernetic metal wings. She is also granted to grow and shoot razor sharp feathers (like Babaeng Lawin's Ability) that grows in her wings. Roma inherits from Babaeng Linta is her ability to copy or imitate the appearance of a person which she use to copy Ding's appearance to steal the stone.