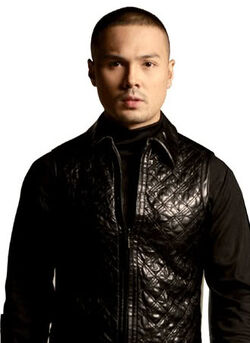 Shiro Del Sol (1980s-2009) was the evil leader of a group of terrorists- the notorious Bazooka Gang. He was a son of a crime lord named Don Dionisio and Madame Alee, Narda's mother, was his mother-figure. His real mother was died. He had made himself Darna's enemy. One time, he attempted to rob a bank. Darna appeared but Shiro was able to hurt her using a bazooka (at this time Darna was lacking her invulnerability. Another time, his terrorists attacked a freeway and almost killed Eduardo Morgan but Darna saved him and she managed to stop the terrorists. Another time, Shiro and his gang go undercover to Father Mateo's Church to steal a golden crown currently on display. When Darna arrives, Shiro tells Darna that he planted a bomb at San Martin Elementary School which is set to explode in 30 Minutes. Darna manages to remove the bomb. After his string of failures, he and Darna met again and a shooting dart stops her. The gang kidnapped her. He had another plan, to bomb the entire plaza of San Martin. Unknown to Shiro, his mother-figure Alee made a deal with Darna and freed her to stop Shiro's henchmen, with the condition that she'll let Shiro go, after the bomb is diffused. After he attempted to blast the entire plaza but fails, Darna subdued him and turned him over to the police, against her word that she won't touch Shiro.

Later Madame Alee found out that Shiro's crimes are unbailable and that Shiro might not be freed from prison. Shiro had escaped with his minions' help. He brought Armida into his secret house and he becomes her ally. He is somewhat having feelings for Armida. However, Shiro uses her for his personal gain. After Armida findds that Shiro has been using her, she uses him to get Dr, Morgan to upgrade her, after which she turns on Shiro. Later he manages to capture her and enslave her but she escapes from his trap and uses her wings to wound Shiro. He tried to escape on his private airplane Armida went after him and launched missles she had in her mini rocket laucher and destroyed Shiro's airplane. Shiro, barely living is found by Darna and asks Darna to tell his mother that he was sorry for everything he has done. Darna brings Shiro to San Martin church where his mother sees Shiro, however he succumbs to his wounds and  dies.

Note: Shiro may have actually had feelings for Armida/ Babaeng Lawin but due to Liberty's jealousy, he was forced to say those things, but unluckily, Armida picked up on it