Valentina is played by actress Iwa Moto. She is also portrayed by Katrina Halili as Serpina whom her body was taken away by her half sister after her original body was destroyed by Darna. 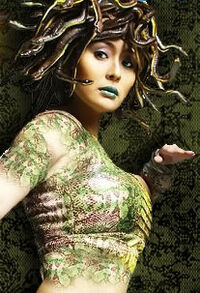 A half serpent-half human creature called Kobra impregnated a woman named Consuelo from the town of San Martin and the result was a baby daughter born with snakes for hair. When she was in her childhood, she was abused by her birth mother because of her appearance as a monster. Valentina became friends with Narda, Eduardo, Ms. Perfecta and had a 'familiar', a snake named Vibora. When she reached her adult ages, she was best friends with Narda. That all changed when someone killed Valentina's snake friend, Vibora. Valentina wants to revenge the death of Vibora by killing the campers that killed Vibora. Then Valentina accidentally injured Narda's friend, Eduardo. Then, Valentina controlled Eduardo and she forced him to love her. Then, Valentina's mother, Consuelo said to her that she does not love her. That made Valentina really mad and she killed her own mother. Then, there was an attack near the church where Valentina was. Then, the Leech Woman pushed Valentina to a cliff. Narda tried to save her but Armida, the Hawk Woman took Narda and Valentina falls to death.

The bloodline of the Snakes[]

Then, her father, Kobra saved her and Valentina was in a coma for a few weeks. Then, she woke up in Kobra's cave and she realizes that her hair is gone. Then, she saw her father, Kobra. Kobra said that Valentina will not leave his cave and Kobra put Valentina in a small room with no escape doors. But, Valentina escapes by digging through the walls. She ends up outside believing that she can get the man she truly loves which is Eduardo. She went to Eduardo's house and she told Eduardo tat she is alive. Eduardo allows her to live in his house even though Eduardo does not love Valentina. Then, Eduardo spent time with Valentina by going to the store and buying clothes. Valentina also got a wig so her boldness wont be shown. Then, Valentina heards that Eduardo went to Narda. She is jealous but she pretended that she reunited with Narda. Then, Valentina secretly follows Narda and she finds out that she is friends with Roma. Then, Valentina secretly follows Roma and discovers that Roma has a boyfriend named Gabriel and she also finds out that Roma is the Babaeng Impakta (Demon Woman). Then, Valentina went to Gabriel and pretended that her name is Narda. Valentina tells Gabriel that Roma is the Impakta. Shortly afterwards, Valentina gets injured by a controlled Darna. She recovers after the incident. Then, Eduardo reveals his admiration for the superhero Darna. Valentina gets really jealous both of Darna and Narda. Valentina professes to Eduardo's friend, Watson that she will love Eduardo forever, making it clear that she will do anything to make a relationship between them happen. Then, Narda goes to Eduardo's house and she and Valentina fight. Valentina was about to kill an unconscious Narda with her snakes but Eduardo came in and Narda wakes up. Neither she nor Eduardo are aware of the reptilian nature up to now.

The town hermit eventually discovers Valentina's nature and reveals that she has the ability to heal. She becomes the town 'saint' for a while, with people visiting to get healed. However, when Eduardo gets struck with a poison that threatens his life, Valentina finds herself unable to cure her one true love.

With Serpina reeling from an attack, Loleng calls on Valentina to help Serpina. When she heals her and Serpina awakens, the two snake-girls discover that they share a psychic link. Serpina later attempts to reach out to Valentina but discovers that she is a deceptive woman. After a telepathic confrontation, where Serpina reveals they're actually sisters, Valentina shoves Serpina, to the surprise of Gabriel, Narda and Eduardo. As Narda questions Valentina about her cruel behavior, Valentina psychically threatens Serpina, which prompts Serpina to clue Eduardo in that Valentina has a huge secret she is keeping from everyone- a very dark secret.

Previously, Eduardo had found a video wherein a gorgon had killed his friends. With Serpina's ominous message and somewhat of a clue that Valentina may be not who she says she is, Eduardo creeps up to Valentina in her sleep and uncovers that she, in fact is the gorgon. He confronts her and attempts to shoot her with his gun. A frightened and wounded Valentina runs away. Shortly after, Valentina finds a snake expert named Delia who now takes care of Valentina. Valentina is unaware that her mother Consuelo is still alive.

Valentina was confronted by her mother who verbally taunts her daughter again for her death. Infuriated, Valentina chases after Consuelo to kill her but Darna arrives and rescues her. Valentina escapes before Darna confronts her. Darna tries to help Valentina and reason out to her that she is not a monster but she distrusts her and fights Darna but discovers that she was strong. Dr. Morgan arrives and tried to convince her to join with him so that he can help her but Valentina grips Morgan in the neck. Eduardo arrives and stabs Valentina through the chest.

Valentina confronts Narda and Ding. Narda was surprised by her resurrection and attempts to attack Ding and her former best friend but were saved by Pancho, a police detective who was Narda's rival during her childhood, allowing Narda to use the stone to fight Valentina. After she escape, Valentina arrives at a hospital and starts to attack the civilians with her snakes. After Darna arrives and fights with her, Valentina uses her staff and creates a shockwave which collapses a ceiling against the civilians but Darna manage to hold it to buy time for the civilians to escape and manage to store Valentina's snakes to the hospital rooms. With Pancho's aid, Darna fights Valentina and defeated her. Valentina manage to escape from the crater before Darna arrives.

Valentina learns from Consuelo that Narda is Darna, and confronts her nemesis. She attempts to give Darna her finishing blow but she realized that it was just a branch that was given by Serpina, who has her real staff with her. Valentina attempts to fight her but Darna throws her to branch, impaling her. Due to it's excess age after her resurrection, her body crumbles apart, leaving her gaseous apparition left from her original body.

The New Queen of the Snakes[]

After her original body was destroyed, her spirit arrives at the cave and possesses Serpina's pet snake, Wanga, to bite her in the wrist. After Serpina died, Valentina's spirit was able to take over her body, which grows snakes in her hair with no memory of Serpina's life. With her new body, Valentina arrives at the orphanage and attacks Aleli before Darna arrives to fight her but Roma, who was Serpina's mother, arrives and escapes. In the final episode Valentina was finally defeated.

Community content is available under CC-BY-SA unless otherwise noted.